With a duo repertoire ranging from emotional soundscapes to intoxicating rhythmical pieces, violinist Bjarke Falgren and guitarist Sönke Meinen re-shaped the sound of a violin and guitar duo. In their compositions the two virtuosos blend folk influences with classical music, fingerstyle guitar and a pinch of jazz.

Their highly acclaimed duo debut album “Postcard to Self” got nominated twice for the Danish Music Awards 2019: In the categories „World Music Album of the Year“ and „Composer of the Year“. 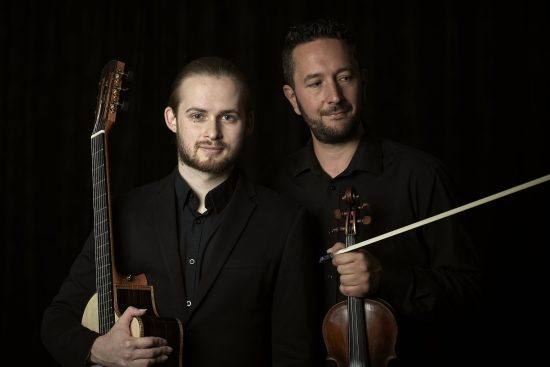 Denmark-based Bjarke Falgren tours all around the world and writes and produces music for film and theatre. As well as in the duo with Sönke Meinen, Falgren is also currently active as a solo artist and as a member of various band constellations, e. g. Hot N Spicy, World On A String or the Bjarke Falgren & Paolo Russo Duo. Jazz violin legend Svend Asmussen has enthusiastically designated him as his successor stating: “Bjarke Falgren is the hardest swingin´ fiddler I have heard since Stuff Smith.” ARVE Error: src mismatch
url: https://www.youtube.com/watch?v=J42Az9enBLM&list=PLrZypAJqy-QociNEA2__js4gi8sivpnd0&index=3
src in: https://www.youtube-nocookie.com/embed/J42Az9enBLM?list=PLrZypAJqy-QociNEA2__js4gi8sivpnd0
src gen: https://www.youtube-nocookie.com/embed/J42Az9enBLM

German guitarist Sönke Meinen also performs solo and together with jazz guitarist Philipp Wiechert. He has won numerous prizes, and in 2016 he collected awards at two of the largest international guitar competitions: the well-respected „Guitar Masters“ (first prize) and the European Guitar Award (sponsoring prize). The Australian guitar wizard Tommy Emmanuel introduced Sönke Meinen to his audience as „one of the most creative guitarists in the scene today“.

Falgren and Meinen coax a wide range of different timbres out of their instruments, from warm and tender to powerful and percussive. Their original compositions are sometimes extremely gentle and sometimes highly energetic, but always full of playfulness and emotional intensity.