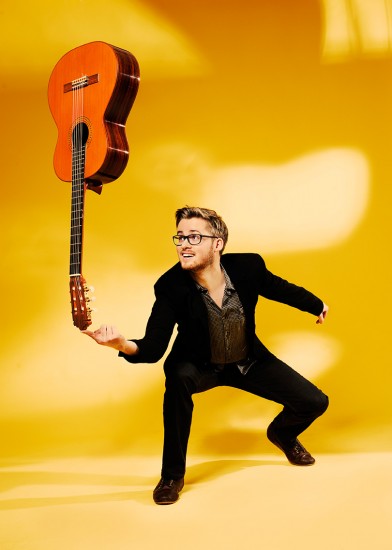 With his music, in which he combines virtuoso fingerstyle guitar with influences from jazz, world- and classical music, Sönke Meinen has acquired an outstanding reputation in the international guitar scene.

He has won numerous prizes, and in 2016 he collected awards at two of the largest international guitar competitions: the well-respected „Guitar Masters“ (first prize) and the European Guitar Award (sponsoring prize). The Australian guitar wizard Tommy Emmanuel introduced Sönke Meinen to his audience as „one of the most creative guitarists in the scene today“.

Sönke Meinen was born in 1991 and grew up in Ihlow/East Frisia. He studied under Prof. Thomas Fellow, Prof. Stephan Bormann and Reentko Dirks at the College of Music in Dresden, where he started teaching himself in 2019. He toured almost every European country as well as Australia, Russia, China, Korea and Japan. Sönke Meinen is not only performing in solo concerts, but also together with Danish violin virtuoso Bjarke Falgren. Their highly acclaimed duo debut album „Postcard to Self“ got nominated twice for the Danish Music Awards.

In addition to his musical work as a guitarist and composer, Sönke Meinen initiated the International Freepsum Guitar Festival which annually takes place since 2011.